With a busy Black Friday behind us, it’s time to introduce you to a few new brews we’ve canned in time for the Christmas period.

Moto Psycho Nightmare has been out and about for a couple of weeks now. It’s a 9% alcohol by volume Vegan Vanilla & Chocolate Marble Cake Stout brewed in collaboration with Sue Hayward of the Waen Brewery. You may have noticed Sue popping up on our social media over the last few months as she has been building our sales in GB. She has been an absolute legend, and is well worth a follow @suethebrew. As you might have guessed the beer itself is sweet and cakey, a dessert in a glass. Moto Psycho Nightmare is also a HVS climb on Spellack, while the label features Gareth’s close-up of the “marble cake” rock face at Altnadue Quarry.

Phantoms is a 7.6% alcohol by volume New England-style Double IPA. Pouring a hazy yellow, it is full of juicy and sticky hops with a low bitterness. Dry hopped with Azzaca, Amarillo and Cashmere at 15g/l. It really is quite delicious. And I must say that the label looks great. Phantoms is also an E1 climb on Pigeon Rock.

Broken Arrow is a 7% alcohol by volume Cinnamon Pretzel Belgian-style Dubbel. Thanks to Emese for the photo on this label. It has a complex malt bill of Vienna, Amber, Crystal and Cara malts which are sweet and bready, lightly spiced with Cinnamon, Nutmeg and Ginger for a wintery feel. A Christmas market in a glass. Broken Arrow is another HVS climb on Spellack.

Yellow Brick Road is a 6.5% alcohol by volume Cold Brew Coffee Stout brewed in collaboration with our local coffee gurus at Church Lane Coffee. You know, the guys who did the great food at our tap room in August? Paddy ground their 100% Colombian house espresso coffee, delivered it to the brewery minutes later and it went straight in the tank as “dry bean”. The result is a rich, aromatic and comforting stout. Yellow Brick Road is also an E1 climb on Spellack.

I feel like I’ve talked a lot this year about Gareth’s label designs, but with the extra little details in these latest releases he has only gone and made them even better. Award-winning beer writer Pete Brown picked up on the MMB labels back in the summer while researching his new book on can design, and now they’re in print! If you’re intrigued by the design on your can label almost as much as the beer inside, you can read more about Pete’s project here.

Our new beers shipped to Nelson Sauvin today for onward distribution to your favourite independent off licence in Northern Ireland. A few cases are making their way across the water to GB too. And of course all the beers are available on our online shop either as full cases or as part of a new selection of mixed packs, including our “12 Beers of Christmas” box. 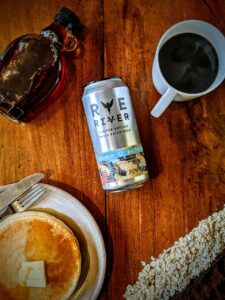