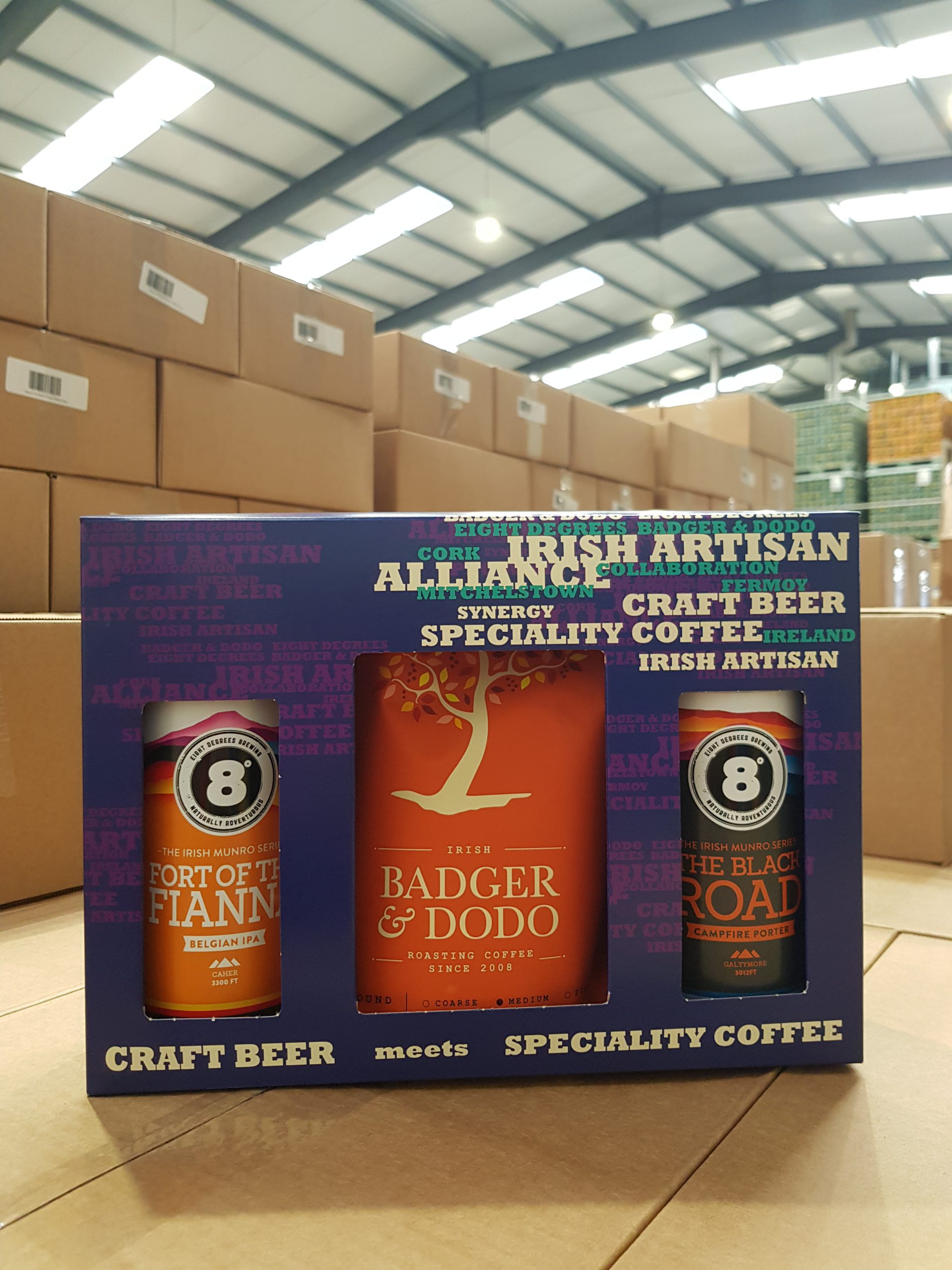 Beer and coffee.
Coffee and beer.
Two of our favourite things.

For Christmas 2020, Eight Degrees has teamed up once again with local coffee roaster Badger & Dodo for a limited edition gift pack. With two cans of Eight Degrees IRISH MUNRO Series releases and a bag of Badger & Dodo’s iconic Blackwater Blend coffee, this is a special treat for someone who only deserves the best.

Based in North Cork, just 20kms apart, Badger & Dodo and Eight Degrees have spent the last decade blazing trails in two parallel movements in Ireland: speciality coffee and craft beer. With a clear focus on quality and innovation, they have found ways to take small, everyday moments – a cup of coffee, a glass of beer – and turn them into something exciting and memorable.

Both businesses take inspiration from the surrounding landscape; the beers are named after Irish Munro mountains in Cork and Kerry, while the coffee takes the name of the river that flows through counties Kerry, Cork and Waterford.

The Black Road is the hillwalker route up Galtybeg and onto the higher Galtymore for magical views across the countryside. Inspired by the mountains, we’ve brewed a porter using Belgian and German malts that impart beech- and oak-smoked flavours along with coffee notes.

Dark, smooth and complex, this is the beer that we want to drink while camping beside enchanted Lough Curra below Galtymore on a chilly evening: a just reward for an afternoon’s scramble up this glorious mountain.

IRISH MUNRO Series #4: Fort of the Fianna Belgian IPA
Caher, 3300 ft
At 3300 ft, or exactly 1,000m (for our metric-loving Antipodeans), Caher is the third highest peak in Ireland. Part of Kerry’s MacGillycuddy’s Reeks, Caher – in Irish Cathair na Féinne – translates as stone fort of the Fianna. This is land steeped in Irish mythology from the time when Fionn MacCumhaill and his army of brave warriors, the Fianna, hunted deer through the mountains.

To honour these legendary warriors, we’ve brewed something strong and hoppy in a Belgian style.

We added our current favourite hop Loral into the whirlpool for this Belgian IPA, followed by dry hopping with the elite new experimental HBC 522, which has strong citrus and floral notes. Singing above all this is our Belgian yeast strain of choice: BE256 is a quick attenuator producing a clean beer with hints of spice, clove and banana. Raise a glass to the Fianna.

About the coffee:
Blackwater Blend
Originally developed in 2009, Blackwater Blend is Badger & Dodo’s most popular café blend nationwide. Featuring 100% Arabica, Rainforest Alliance certified coffees from Colombia, Brazil and Guatemala, all beans are roasted separately before blending. Light to medium roasted on average. This is a seasonally managed blend – that is, from time to time it will vary slightly – but in the main it will have a lush, smooth and sweet body with a delicate but evident acidity. Never burnt or charred. Easy for espresso, soft and sweet in milk, with milk chocolate, praline and orange notes in the cup.

About Badger & Dodo
badgeranddodo.ie
Australian Brock Lewin is the Badger in Badger & Dodo, Broc being Irish for badger. Brock first pulled a shot of coffee in 1993 while at Uni in Sydney but really came to terms with speciality coffee while living in Melbourne from 2005-08. He relocated to Fermoy, Co Cork, with his wife Claire and they established their roastery Badger & Dodo on Claire’s parents’ farm in July 2008. Dodo is the father-in-law!

About Eight Degrees Brewing
eightdegrees.ie
Eight Degrees is an award-winning Irish microbrewery renowned for its innovation and experimentation. It was established in 2010 at the foot of the majestic Galtee mountains by Kiwi Scott and Aussie Cam, who were lured to Ireland by two Irish cailíns. The crew at Eight Degrees Brewing are passionate about producing exciting and adventurous beers using only natural ingredients. Sláinte!

Grab yourself some beers 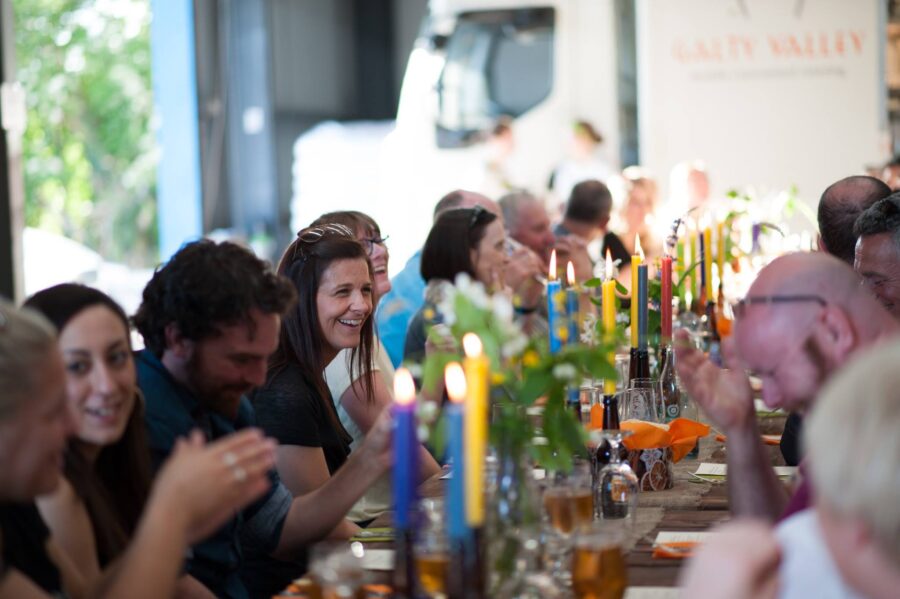